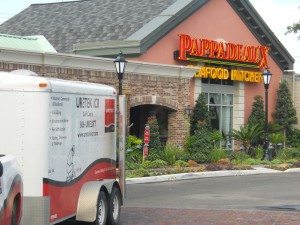 A standard clay brick weighs approximately five pounds, which is a relatively heavy weight for a single piece of building material. So, when building a structure that features a prodigious number of bricks, it is integral that the soil underneath be compacted and stable enough to support the weight of the bricks and other building material. Unfortunately, over time soil will erode or give way to the weight, causing the brick structure to shift and separate.

This was the problem facing a Houston-area Pappadeaux restaurant. On the restaurant’s patio/outdoor dining area there were three half-circle brick parapets that protruded out toward the sidewalk. Each of these brick parapets were shifting due to their weight and the unstable soil underneath. The gaps in the parapet were eyesores and would only worsen if left unrepaired. Cracks in walls are frequently signs of foundation problems. URETEK ICR Gulf Coast was contacted to provide quick, non-invasive stabilization to raise the slab back up and fix the brick veneer gap.

Using URETEK’s unique high-density geopolymer for foam mudjacking, technicians pumped under the slab that held the parapet. The fast-expanding geopolymer compressed and stabilized the weak soil, then once the stabilization was complete, the geopolymer gently lifted the slab and brick parapet back to its original state. URETEK technicians were successful in stabilizing the soil and minimizing the gapping in the parapet. Additionally, technicians were able to complete their work before the Pappadeaux restaurant opened for lunch. 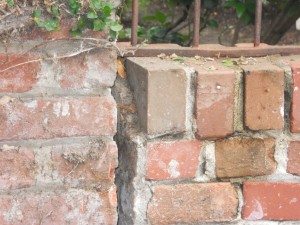 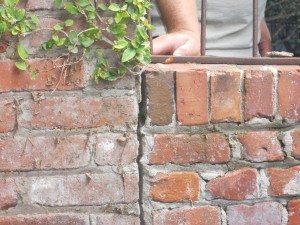