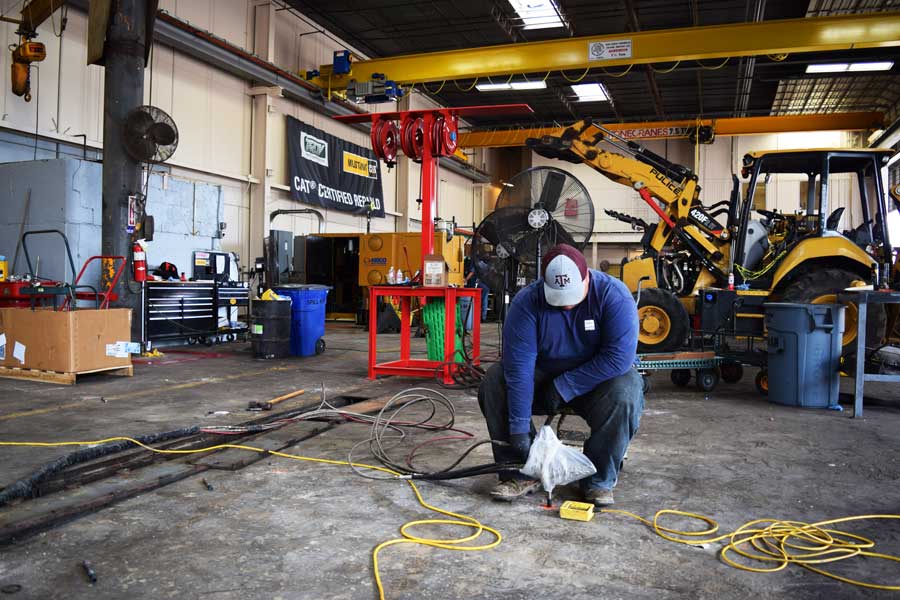 Mustang Cat contacted URETEK to investigate their Houston under-slab plumbing because an underground 8” water pipe burst near their machine maintenance building. The pipe supplied water to the fire sprinkler system inside the building.The burst pipe gushed water for approximately 14 hours before it was discovered. After ground-penetrating radar and probing, it was determined that two service bays had multiple large voids throughout. Voids were discovered as far as 60’ away from the burst pipe. Concerned with the slab foundation’s stability and longevity, Mustang Cat hired URETEK ICR Gulf Coast for this Houston, TX foundation repair using expanding polymer.

URETEK uses a zero-excavation process called the URETEK Method to inject high-density polymer underneath concrete. Their patented polymer expands to fill voids, stabilize soil, and can even lift sunken foundations.

Tasked with filling voids and stabilizing the foundation, URETEK technicians started by methodically drilling injections sites every 4’ within the affected area. Each injection site is a 5/8” hole drilled through the slab, which is grouted upon completion.

Ready to get an estimate?

Let's talk about it. We can schedule a time to meet about your home or commercial property needs. The best way to get in touch is to fill out our contact form. We typically respond within 24 hours..

We try to explain as much as we can on the page, but if we forgot something or you have more questions, contact us! Reach out to us and we’ll respond as quickly as we can. We’ll typically get back to you within 24 hours.